A great day in Harlem

Photographer Art Kane took the most wonderful photograph in jazz history – remarkable for many reasons. In features 57 of the best jazz musicians and the image has come to be called, ‘A Great Day In Harlem’.

Kane, a freelance photographer was on assignment for Esquire magazine, and he took the picture at around 10 a.m. on 12 August 1958 at 17 East 126th Street, between Fifth and Madison Avenue in Harlem. Esquire published the photo in its January 1959 issue. In 1994 a TV documentary was made as to how this incredible photo came to be taken, one that Quincy Jones calls, “An astonishing photograph.”

What makes this photo so extraordinary is that it was Art Kane’s first photo shoot; he was an art director for various New York magazines. He was given the chance and it was Kane’s idea to take the photo in Harlem, a risk on many levels, not least trying to get everyone together in one place at 10 a.m. in the morning. As Kane said, he had no studio, so he had no choice. Gerry Mulligan didn’t believe anyone would show up…it was way too early.

Of the 57 musicians featured only two remain alive – Sonny Rollins and Benny Golson.

Here's the full list of musicians in the photo 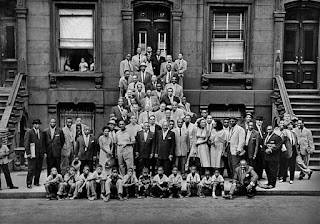