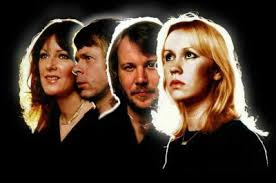 
If it is ended positively, Fab grpup will reunite mybe just one concert in 2014...

Legendary Swedish pop group ABBA could reunite next year to mark 40 years since they won the Eurovision Song Contest and were catapulted to global stardom, singer Agnetha Faltskog has revealed. "Of course it's something we're thinking about," 63-year-old Faltskog told the German weekly Welt am Sonntag in an interview. "There seem to be plans to do something to mark this anniversary in some way, but I can't say at this point what will come of them."

ABBA formed in 1972 when Faltskog met guitarist and songwriter Bjorn Ulvaeus, whom she later married, and Benny Andersson and Anni-Frid Lyngstad. Andersson and Lyngstad were also married for a while, but both couples later divorced. The group's self-penned hit Waterloo won the Eurovision Song Contest in Brighton, England, in April 1974, and immediately became a global phenomenon. With their iconic glam outfits and pioneering music videos, they scored an unprecedented string of worldwide number one hits, such as Mamma Mia, Dancing Queen and Super Trouper.

They became Sweden's biggest-ever pop act and one of the most successful pop groups in history, selling more than 380 million records worldwide. The band never formally broke up, but their last album, The Visitors, appeared in 1982.

Since then, Faltskog and Lyngstad pursued solo careers and Andersson and Ulvaeus wrote hit musical Chess and reworked 24 ABBA hits into a musical called Mamma Mia.

Group has resisted previous calls for a reunion

Despite intense pressure to reform, all four members have persistently ruled out doing so in the past. In July 2008, all four ABBA members were reunited at the Swedish premiere of the film Mamma Mia, only the second time all of them had appeared together in public since 1986.

At the time, Ulvaeus and Andersson said there was "simply no motivation to regroup". "We would like people to remember us as we were, young, exuberant and full of ambition," Ulvaeus said. Ulvaeus made similar comments late last year when he announced plans for an ABBA museum, saying it was "cool" that the band was one that had never been reunited.

The ABBA museum was opened in Stockholm on May 7 this year. There have, however, been countless ABBA tribute bands, and the group's music featured prominently in two cult Australian films, The Adventures Of Priscilla, Queen Of The Desert and Muriel's Wedding, both released in 1994. Mamma Mia was itself turned into a film starring Meryl Streep and Pierce Brosnan in 2008.

In her interview with Welt am Sonntag, Faltskog, who recently released a new solo album, said she did not want to spend too much time pondering whether a reunion should take place or not.

"That eats up too much energy. Don't just think about it, just do it," she said. And she warned that time was running out.

"We're all getting older. I can't imagine going onto the stage on walking sticks."

A great song from the group...